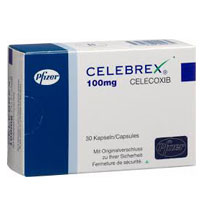 Action Mechanism
Celebrex causes the amelioration of pain as well as various inflammatory symptoms associated with clinical conditions such as fever, joint swelling as well as tenderness by acting against the synthesis of prostaglandins. This medication achieves this task by hindering the activity of the COX enzyme called as cyclooxygenase-2 (COX-2), which plays a key role in producing the inflammatory mediators called prostaglandins.

The dosage of Celebrex that is recommended in most cases and which forms the standard dosage for calming down the symptoms allied with osteoarthritis complications is a single dose of 200 mg per day or as a divided dose of 100 mg consumed twice a day. Whereas, the dosage advised for treatment of rheumatoid arthritis in younger generation ranges between 100 mg – 200 mg and which is supposed to be taken two times daily.

The advantages of Celebrex are its great efficacy and minimal toxicity along with its ability to produce a nominal effect on intestine and stomach and also it’s potential to not hinder with the blood clotting mechanism.